Princess Lora, known as Princess Rooney (ルーニー姫) in Japan, is the princess of Radaxian and wife of Igul. She was imprisoned in Janken the Great's castle after he invaded the planet Aries. She was freed by Alex after he defeated Janken, telling Alex that his mother, Queen Patricia, was safe somewhere else already. 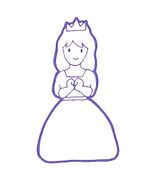 Alex Kidd in Miracle World
Add a photo to this gallery
Retrieved from "https://alex-kidd.fandom.com/wiki/Princess_Lora?oldid=5036"
Community content is available under CC-BY-SA unless otherwise noted.