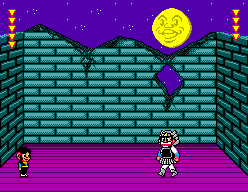 Kabuto is the first boss from Alex Kidd in Shinobi World.

Kabuto appears as a tall man wearing a samurai armor. It mostly moves forward, eventually throwing a bouncing fireball. Once it takes enough damage it will shrink into a miniature of himself and shoot smaller fireballs as a result.

Retrieved from "https://alex-kidd.fandom.com/wiki/Kabuto?oldid=5079"
Community content is available under CC-BY-SA unless otherwise noted.