Janken the Great (じゃんけん大王), also known simply as Janken, was an alien invader of Radaxian and alleged kidnapper of King Thunder. He caused severe damage to the planet, spreading monsters and transforming much of the populace into stone.

Janken the Great was the Emperor of the planet Janbarik. His name is derived from the game Janken, of which he is the undisputed master, having not lost a single match ever. He invaded the planet Aries, along with his minions Gooseka, Chokkinna and Parplin with the intent on ruling it forever as part of his imperial domain.

His plan was ultimately foiled by Alex Kidd, who defeated his minions and all three of his henchmen. He then proceeded to Janken's castle in the east of the kingdom, near Cragg Lake and defeated him at his own game.

Janken the Great is a gargantuan humanoid many times bigger than Arians and even his own minions. He wears a mask, a single horned helmet and carries a sword. 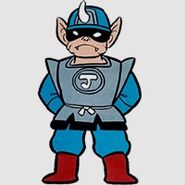 Janken, in game
Add a photo to this gallery
Retrieved from "https://alex-kidd.fandom.com/wiki/Janken_the_Great?oldid=5042"
Community content is available under CC-BY-SA unless otherwise noted.