Alex Kidd in the Enchanted Castle is a side-scrolling platform game developed and published by Sega for the Sega Mega Drive/Genesis video game console. The game was released in Japan in February 1989, in the United States in January 1990 and in Europe in November 1990. It is the only 16-bit platform game starring Alex Kidd, and the fifth game in the Alex Kidd Series of video games. The storyline is a direct sequel to the events of 1986's Alex Kidd in Miracle World.

The whole Kidd family is upset! Alex's father, King Thor, is missing! At home on planet Aries, Alex hears a rumor that King Thor's been kidnapped by Ashra, the mean ruler of planet Paperock. Alex speeds to Paperock and starts searching for his dad.

But he runs right into trouble. All the creatures on Paperock decide to keep Alex away from Sky Castle, Ashra's hideaway. They block his path and chase him when he tries to get away. So Alex gets tough! He knows how to jump, punch, and kick. And he finds out how much fun it is when the creatures explode! Alex uses his power wallops on anything that gets in his way. And then he grabs the gold and treasures that magically appear.

But a big surprise is waiting for this Kidd. Alex finds himself dragged into a game of Janken with the Paperock bullies. In this game, he's got to make a hand signal for paper, scissors, or rock at the same time as his opponent. If Alex's sign beats the bully's sign, Alex wins. If not, Alex gets bonked out and loses some of his gold. How embarrassing!

Will Alex make it to the Enchanted Castle and find his dad? Or will the smart-aleck Paperockers get a good laugh? It's up to you!

The player guides Alex through eleven levels by fighting and avoiding enemies and obstacles. Alex can jump, kick, crawl or punch enemies, causing them to explode into gold coins, called Baums. One hit from any enemy causes Alex to die instantly.

Alex has access to several items and vehicles that help him complete his quest, including a Sukopako Motorcycle, Pedicopter, and Pogo Stick, which each give him unique abilities. This game expands on the inventory system from the previous game, as now vehicles can be stocked and used at any time.

While traveling through the eleven levels, Alex must defeat several opponents in Janken during his search for King Thunder. Shops have been ditched in favor of the Janken Houses, where the player bets money to win prizes on Janken matches. 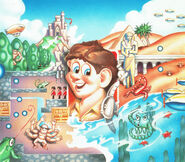 Key art
Add a photo to this gallery

Retrieved from "https://alex-kidd.fandom.com/wiki/Alex_Kidd_in_the_Enchanted_Castle?oldid=5369"
Community content is available under CC-BY-SA unless otherwise noted.