Alex Kidd (アレックス・キッド Arekkusu Kiddo), Alex (アレク Areku, "Alec" in Japan) for short, is a video game character created by Kotaro Hayashida whose popularity peaked during the late 1980s and who was the protagonist of both a series of video games released by Sega in their fictional universe, as well as in numerous spin-off merchandise. For a time he was an unofficial mascot of Sega, taking the title from Opa-Opa, before becoming overshadowed by the immensely popular Sonic the Hedgehog.

Alex Kidd is a short boy of the Arian race with large ears and ever so slight monkey-like features. He wears a trademark red and yellow jumpsuit, and has oversized hands. Sometimes he appeared as a teenager, although the only time his exact age has been stated, he was stated to be 14 years old. The games state that he lived many hundreds of years previously. At a glance its easy to see that the character of Alex Kidd was inspired chiefly by Bruce Lee (evident in the jump suit) and the character Sun Wukong, the Monkey King.

Initially, in the original game, he is an orphan who lives alone on Mt. Eternal, on the planet Aries, where he has trained in the ancient Shellcore technique. This technique enables an Arian to alter the size and toughness of their fists through sheer willpower, and enables one to shatter boulders with their bare fists.

After the disappearance of King Thunder Radaxian, the planet Aries is thrown into chaos. An usurper, Janken the Great, kidnaps the next in line to the throne, Prince Igul, and his fiancée Princess Lora. Many of the citizens are turned to stone through Janken's magic. Alex learns from a dying man that he is in fact a lost member of the Radaxian Royal Family, son of King Thunder and brother of Prince Igul. Alex sets out to discover the whereabouts of his father, rescue his brother, restore the kingdom, and destroy the monstrous minions of Janken. Numerous magical artifacts and medallions are needed to be discovered to progress in the story.

During the game, Alex can collect Baums, the currency on Aires, which can then be used to purchase extra lives, items, power-ups and vehicles for Alex Kidd from shops at the start of several stages, such as the Sukopako Motorcycle, Suisui Boat and the Pedicopter (a small pedal-powered helicopter).

After he defeats Janken The Great, Alex restores peace to Radaxian, and that the people who were turned to stone by Janken are returned to normal. In the city, Igul is crowned King of Radaxian, and Alex Kidd, with his martial arts, takes the position of Defender of the City, although his next goal will be to find his father, King Thunder.

Alex Kidd in the Enchanted CastleEdit

Some time later, Alex heared a rumor that his long lost father is alive and well on the planet Paperock. The Planet earned this name as it is inhabited by experts at the game "Rock, Paper, Scissors." Despite discouragement from his family, Alex travels to the Planet Paperock in hopes of finding his father.

Segagaga is a Dreamcast game where you get to take control of Sega to help it win the video game war. At one point, you run into Alex Kidd, who relates his sob story of how he used to be the mascot of Sega, but was demoted in favor of Sonic the Hedgehog. Instead of starring in video games, he's now forced to work retail at one of Sega's shops. This is a sad yet comical look at Alex Kidd.[1]

Alex Kidd appears in this game as an unlockable, playable character. This game marks his first playable 3-D appearance.

Alex Kidd is a playable character in the multi-platform racer Sonic & Sega All-Stars Racing. He rides a red motorcycle named "Sukopako". For his All-Star move, he hops into a pedal-powered gyro-copter named the "Peticopter", allowing him to fly and shoot damaging projectiles at opponents.

Alex Kidd is an unlockable character in Sonic & All-Stars Racing Transformed, being unlocked automatically when the system's clock reads any time after December 25, 2012. Because they were released after this date, the Steam and 3DS versions have Alex Kidd available from the start. His traditional red and yellow jumpsuit is replaced with a Santa Claus outfit (which consists of a red Santa coat, black boots, white gloves, and brown belt with a golden belt buckle) to reflect his status as a holiday bonus. His All-Star Move involves "Rock, Paper, Scissors" firing two gigantic hands out from the sides of his vehicle, hitting adjacent racers.

Alex Kidd is found in the Power Drift character select screen (where he got on his bicycle and got hit by a blue car bouncing around) and the “Thank You for Playing” scene where he waves his hand in the regular credits (game logo complication-themed). Alex Kidd appears in scenes from the Thunder Blade themed credits, like riding on his Sukopako Motorcycle on the road with the orange car (two times), riding on his Pedicopter to shoot down the helicopter in the sky, a poster of Alex Kidd punching in an apartment building, and the “Thank You for Playing” scene where Alex Kidd is waving his hand. 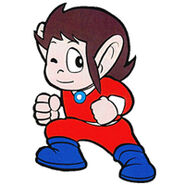 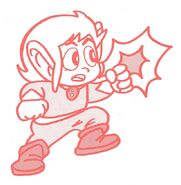 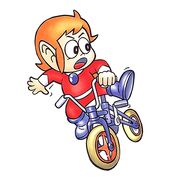 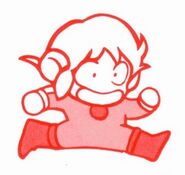 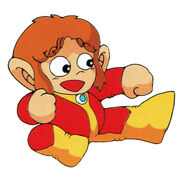 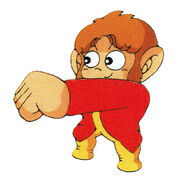 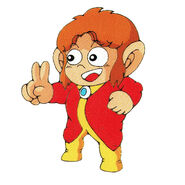 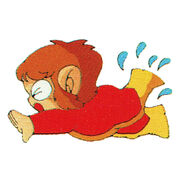 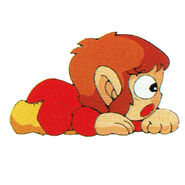 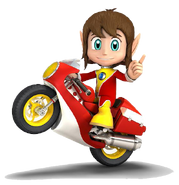 Worlds Unite
Add a photo to this gallery

Retrieved from "https://alex-kidd.fandom.com/wiki/Alex_Kidd?oldid=5387"
Community content is available under CC-BY-SA unless otherwise noted.